Skip to content
HomeA Further Letter to the Girlfriend

Hi.
So how is it all working out for you? Been over a year now, eh? I notice that you have been getting into some pretty dark stuff. The fetish club? The one with the old men in rubber maid costumes? What a rollercoaster you must be on. It’s exiting being a “bad girl”, isn’t it? So much more exciting than your boring life before. The drudgery of rearing a young child on your own. Average and un-noticed. What a world of wonder you have entered. The delicious frisson of “If only they knew…”.Did you really think that a rainbow wig would disguise you? What did you think of your “girlfriend’s” choice of gear? (Pardon me, but it looked a whole lot more expensive than the stuff you had on, but I digress). Maybe it was exciting to walk around with him (sorry, “her”!) decked out in head to toe latex, complete with full head and face hood and huge inflated “boobs”. Just as well you were wearing your glasses – those rubber nipples could have had your eye out.
I don’t really know you, but it strikes me how you never showed any interest in BDSM, kink, “fem-dom” before your new “girlfriend entered your life. And I sincerely do worry about you. I have often considered contacting you directly rather than just penning these imaginary letters. I want to tell you to flee. To run for your life and never look back. To tell you that throwing yourself entirely into his world will drain you of self-worth and leave you smaller and even more vulnerable. That there is *no end* to his pit of porn-obsession, self-absorption and self-pity, and that there isn’t a compassionate bone in his body, no matter how many corsets or how much kinky gear he buys you, or nights out with him “en-femme” he pays for – try asking him for rent or money for food or even just to take you out to a cinema or do something “normal” with you and you will learn your worth to him.
I wonder if you know about the ad he has running looking for a “dominant lesbian who likes to humiliate Transsexuals” to join you and he to “teach you both about BDSM”? Hmmm, seems like you are not quite making the grade in the old fem-dom practices, sweetheart. Don’t take it personally, he used to ask me to get involved in that kind of stuff too. He told my naïve self that there are “dominant lesbians” just itching to join me and him to “teach” me how to dominate him. I told I knew plenty of lesbians, thanks very much , and they wouldn’t touch him with a barge pole. Besides, I wasn’t too keen on meeting someone to act as the third person in a scenario of his own porn-informed imaginings. Of course, this was presented to me as for *my* benefit…Oh how I laughed. After I stopped crying. I didn’t want to look at his collection of “hung angels” porn either.
Maybe you really have hankered after a “dominant lesbian” to teach you the fine art of “humiliating transsexuals”. Apologies if I have got this all wrong. But I can’t help noticing the same obsessions that gripped his imagination when he leeched off (pardon – “lived with”) me, this time being played out on you and I thought it worth noting.
Or maybe you don’t know about that ad? Or the other one where he doesn’t mention having a girlfriend. The one where he is looking for “a possible kidnap scenario” by two women? Where he offers to re-locate for the right woman, willing to turn him into a “living sex-doll”. No? Haven’t seen that one? How odd…
Perhaps it’s all very innocent. I’m sure he wouldn’t just be using you as an unwitting prop in his raging autogynephillia. Would he? No. He’s a “transsexual” with “gender dysphoria” and stuff. He did a questionnaire online – it must be true.
And now you are a lesbian. Just like that. And he (sorry, she!) is a “kinky trans lesbian”, just like “she” says in the numerous ads “she” has floating round on the internet. And we mustn’t evah evah kink-shame! Goodness me no! It says so on his favourite feminist Facebook page, Everyday Feminism, and they are the arbiters on everything. Cos you are a feminist too now, aren’t you? I see your name on the Facebook pages. Not the one’s I turn to mind you. Like he has told you, I know fuck all about feminism…. Aren’t you glad he introduced you to “proper” feminism? The feminism he knows so much more about than I do – according to him (sorry, her!). So don’t you listen to those evil TERFs with their “biology” and “patriarchy” and stuff. You listen to your girlfriend.
“She” is one of the “protected categories” enshrined in Equality Legislation and Hate Crime laws. Of course he isn’t just some creepy heterosexual man with a porn addiction! No sirree. Your girlfriend is the real deal. A woman, cruelly trapped inside a male body. Suffering untold agonies. Feeling all those womanly feelings and stuff since forever. Not the womanly feelings that are about housework or taking responsibility for stuff mind you – but womanly feelings all the same! The sexxaayy-lady-in-a-latex-face-mask-and-inflatable-boobs womanly feelings. The spit-on-me-and-call-me-slut womanly feelings. The pretend-you-are-nurse-and-tie-me-down-and-give-me-an-enema womanly feelings. The don’t-call-me-a-pervert-and-tell-me-I-can’t-come-in-your-changing-room-or-I-will-have-you-done-for-a-hate-crime-you-fucking-bitch womanly feelings.
So anyway, just checking in. 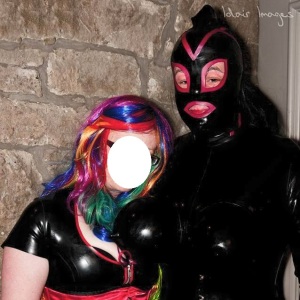 9 thoughts on “A Further Letter to the Girlfriend”